Our members fly patterns make up a significant component of the Tasmanian created flies, both historical as well as in their current forms.

From the legendary vises of Max Christensen, Noel Jetson and Dick Wigram to the amazing creations of Charles Peck, Ivan Iles, John Dekkers and many more, this page is dedicated to those who wish to pass on their inventions and notes and creativity for the betterment of all fly fishers in Tasmania. 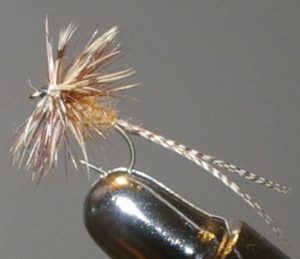 Notes: Tails protrude 3/4” past the end of the hook and tied in each side so that they splay out,

dub in the possum fur and wind forward, tie in the quail and cock hackle, wind the cock hackle

in first and then wind through the quail with 2-3 turns and finish off at the head.

Notes and pattern by the late Ivan Iles

The MOART was developed about the same time as the ‘Mother Of All Bombs’ or MOAB’s were being dropped on Iraq.

The name was adapted to the MOART or Mother Of All Red Tags which has been bombed around the central plateau lakes ever since, particularly during the peak dry fly months.

The MOART is a modest departure from the original Red Tag or ‘Worcestershire Gem’ developed by Martyn Flynn from England around 1850. Jim Allen is known to use a #6 ‘Battleship’ and the MOART may not be dissimilar to this fly. I prefer to use a more ‘subtle’ size #8 instead of #6.

The Red Tag is a highly effective non descript pattern that is rightly placed as one of the most popular Australian fly patterns. A lot has been much written about what it represents and beetles seem to be the general consensus. The shape, size and colour of both body and tag could provide a fair representation of a variety of beetles species found in Tasmania.

This fly is a good floater and ideal for the rougher conditions which can sometimes prevail on the central plateau. Perhaps one of the main features of this fly 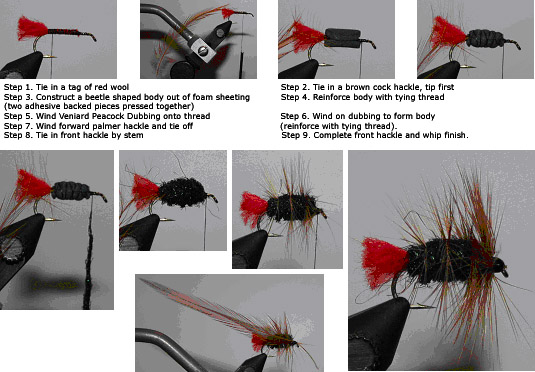 is it’s attention grabbing properties and the fly’s bulk provides an illusion of a substantial meal for the trout. It is a handy bob fly in a loch style trio, and often gets taken in lieu of the more discreet trailing flies.

The fly was designed for durability. I find the peacock dubbing closely resembles the herl, but consider it to be more durable. The foam underbody helps bulk the fly out without adding weight. The most common hook size and type that I utilize is the Black Magic E Series #8 (1x Short Shank). I think the wide gape assists in hooking.

I fish the fly confidently and a review of my diary revealed that it has accounted for approximately 30% of captures during the past few seasons. 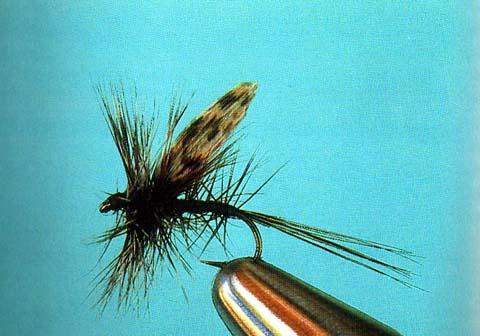 Hackle: One dark chocolate and one grizzly cock hackle wound together.

Fly Notes: This photographed fly and tying notes of this famous fly have been supplied by Charles Peck, club member and originator of this pattern.